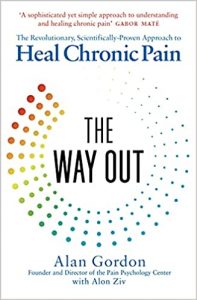 I love this passage from the book ‘The Way Out’ by Alan Gordon as a way of trying to understand the heightened state of arousal we have come to accept as ‘normal’ in our lives.  It’s part of an explanation as to the impact that our stress levels have on our experience of chronic pain.

The book is well worth a read, and  not just for those suffering with chronic pain, but to understand how pain isn’t localized in the body but originates from the brain and how the brain can unintentionally learn ‘chronic pain’.  The book covers Alan Gordon’s Pain Reprocessing Therapy (PRT), a method to enable you to rewire your neural circuits and turn off ‘stuck’ pain signals.

It’s an easy and enjoyable read, as I hope the excerpt shows, that will help many understand what we call neuroplastic pain.

Alan had already introduced two zebras early on in his book, Nervous Nick who is always afraid  and Fearless Frank who never is.  The truth is that we are all (zebras and humans alike) wired and capable of both extremes. We’ve evolved the capacity to be fearful in certain situations, it’s our internal warning system and very useful, while being calm in others, hopefully the majority of the time.

To illustrate how we’ve come to accept a state of stress as ‘normal’, in fact most don’t even realise they are living with a heightened baseline of stress, Alan introduces a 3rd zebra …

<<Normal Neil! When normal Neil spots a lion he is instantly on high alert.  His brain triggers the release of stress hormones like adrenalin and cortisol that make his heart pump fast, send extra blood to his muscles and give him a boost of energy. This is known as the fight or flight response.  Neil isn’t much of a fighter so he’ll choose flight every time and with the help of these hormones he takes off like grease lightening. The fight or flight response helps Neil outrun lions but he’s not on high alert all the time … most of the time Neil is a low alert kind of guy who enjoys chilling with his buddies, grazing and soaking up the African sun. Except for the occasional run for your life situation, Neil’s life on the Savannah is mostly calm.

But what if we gave normal Neil some upgrades.  First lets give Neil a TV … now he can watch the zebra news network. ZNN has 24hr coverage of zebra related news from all over the world but it mostly about lions. Neil watches stories about recent lion attacks, future lion attacks and a terrifying segment called ‘are lions getting faster’.  Even though there are no actual lions nearby, Neil is on high alert.

Next, lets give Neil a cell phone.  The African planes are quite large so Neil uses Instagram to keep up with his bros who are far away.  But for some reason his zebra friends always seem to be doing better than Neil is, their stripes are always perfectly groomed, there mates are good looking, and the grass they are eating literally looks greener than Neil’s grass.  With each notification ping Neil gets a little jolt of hormones keeping him on high alert.

Finally, lets give Neil a job to pay for his cable and cell phone bills. Unfortunately there are no jobs locally so he has to commute 45mins to Antelope Springs. Within a few hours of arriving, his phone is ringing off the hook, his calendar is overflowing with meetings and the spreadsheet he is working on keeps crashing his computer. It’s his first day and Neil already needs a vacation.

With just a few simple tweaks we’ve turned an easy going zebra into a panicky insecure overworked bundle of stress.>>